To BC and Back!

This is my first Journal entry, so hopefully it goes well lol.  I will start by saying that my July was a whirlwind month, but well worth it!  I started off the month by catching some nice walleye on an outing to Calling Lake and Baptiste.  Now the one pictured below is not as big as Andy's 13+ pounder that he landed on the North Saskatchewan River a few years ago, but it put one hell of a bend on a light rod.  If its body had filled out for the size of its head, I can't imagine what it would have weighed!  Either way, it was a great way to start the month.
Posted by Tim Tchir on August 21, 2011 No comments: 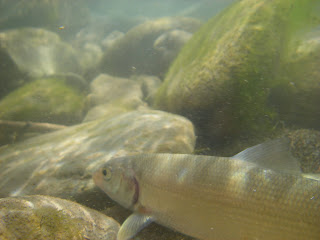 After a 4:00am Big Valley Jamboree Kick-Off bedtime, the 6:00am alarm didn't sound so good to me on the last Friday of July. It was hi ho hi ho off to work I go, but there was one problem. I was in Camrose at someone's house I didn't even know, wearing one contact lense, a beer drenched shirt and I started work in Edmonton around 8:00....Sounds like the beginning of a disaster, but in fact it was the beginning of the best weekend of my life. That night 3 of us rode from Edmonton to Calgary to stay at my cousin Steve's place where we would depart on a journey to Montana the next morning! 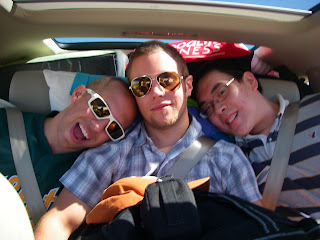 Ever try loading 5 people, camping gear, fishing gear, etc into a small SUV? It sucks. Steve had to share the news with me that my inflatable bed would have to stay behind and so did a bunch of other gear. It was 5 people, 4 mattresses to sleep on and one heck of a cramped vehicle! We left at 5:30 am, hit up Tim Horton's for our last fix of Timbits before crossing into the US of A. Excitement filled the vehicle as we joviously shared stories, jokes and sang songs on our way to Whitefish Montana. There was one problem though: we still needed groceries and had no room in the vehicle for them. Solution: lay Stephanie across myself and my friend Joachim while the groceries rode on the window seat. A little uncomfortable in 90 degree weather, but very practical in order to give the 60 Coors somewhere comfy to sit. 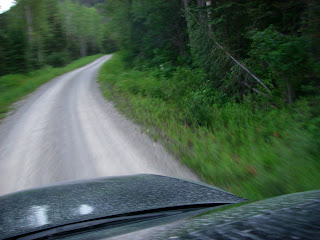 On State land in Montana, you can camp almost anywhere you like as long as you are responsible and respect the land. We found an absolutely georgious spot right beside a lake, built a rock firepit, set up the tent, cracked a few Coors and cooked some hotdogs for supper. That night was incredible. We were happy to not only find a place to camp, but to find an absolute gem of a place as well after all the designated campgrounds had announced they were full. Laying back, you could see every star in the Montana sky. The littlest things make the biggest impressions and the first night out was incredible...until about 3am when the temperature dropped to about 9 degrees celsius and it started to rain. One reminder when you go camping: Bring spare toilet paper. Wiping yer butt with a sock at 4am squatting in wet bushes isn't exactly a moment that dreams are made of....or if it is, bring spare socks on your trip. 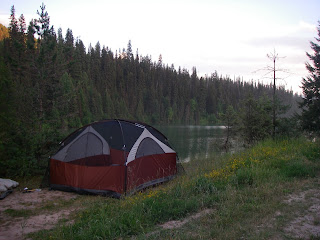 The next day we headed back to the campground on the North Fork of the Flathead River right near the confluence with Big Creek. Since it was a Sunday and August long weekend isn't a long weekend in the states, most campers were leaving. We were dissappointed to find out that Big Creek, or "Big Crick" as the campground operator calls it, was closed to anglers for bull trout protection. Not knowing where to go, he sent us up a gravel road to a pretty little lake he said had cutthroat trout in it. Since we could barely pack enough gear to sleep on, it was obvious we didn't have enough room to pack waders or float tubes for lake fishing. We stopped at the Super Market to try and find anything to use as a boat. We found the answer very quickly. They weren't quite Caddis U-Boats, but they did the trick for the day and fortunately only a couple other anglers saw us floating around in our pink $6 boats! Fortunately they came with 2 drink holders on each boat in case the fishing were to be slow. I rigged everyone up with a good stand-by set-up for most lakes: a floating line, black, green or brown leech and a strike indicator. There was no room on the boats for anything but yourself, two drinks and a rod. Talk about simple fishin! We kicked out into the cold high elevation water and had great conversation, bonding and even good fishin! Scrappy little cutthroat trout were plentiful in this lake and the deep blue sky and big yellow sun lit up our worlds. To say it was fun was an understatement. To say it was a poorly planned gong show, well that too is an understatement! 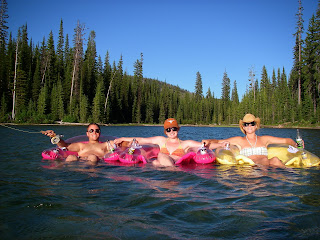 That night we fried up a little cutthroat over the fire, threw around a baseball a little bit and talked about trying out the Flathead River the next morning before our journey to Great Falls to see Eric Church at the Montana State Fair. We had never fished the Flathead before but the North Fork was a decent sized river, similar in size to the Bow, but with very cold water. I knew nymphing would be in order that morning. Cousin Steve, his girlfriend Jackie, Joachim, Stephanie and Myself all hit the river early that morning. I love teaching new people how to fly fish and Steph caught on pretty quick. Although right when she claimed to be a professional, she casted her line in a loop around the rod and made it look like a decorated Christmas tree! 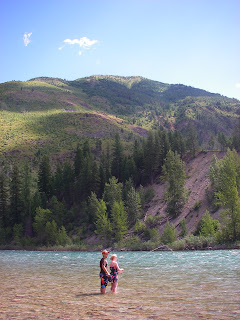 Fishing was pretty good on stonefly nymphs fished near the tailout of the run. Steve landed a decent little whitefish and I landed one a touch bigger as well. 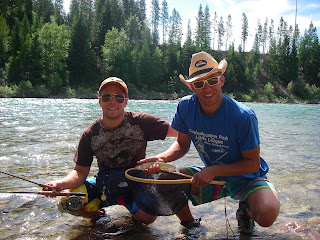 Overall it was good times, good company and something totally new! I recommend to anyone who has never got the chance to go on a road trip like this to do it. Not only is there the thrill of seeing a different country and a totally new area, but there is cheap beer and Skoal for $3 a tin. Talk about a win-win. Thanks to Steve, Jackie, Joachim and Stephanie for making this fun weekend possible. And photo credit goes to Stephanie as well who takes some great photos. 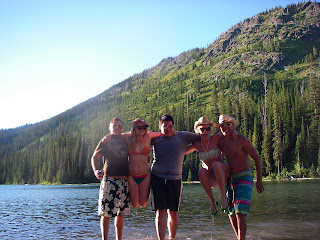