With my very first trip to Vancouver Island back in May still fresh in my mind, my wife and I decided to head out and do some more exploring/visiting further North from Victoria on our summer vacation. After a night's stay at Lac Le Jeune Provincial Park near Kamloops, we were on our way to Horseshoe Bay to catch a ferry to Nanaimo.

We knew the price of a ferry with a travel trailer and truck might be a little pricey, but lets face it, things aren't getting any cheaper these days...and I had some fish to catch that were on my list!  A relatively quick 1.5 hour ferry ride to Nanaimo, and we were off to Campbell River to stay at Elk Fall Provincial Park.  The park is one of the nicest I have seen, and is situated close to the Campbell and Quinsam Rivers, and other attractions in the area as well.  My cousin Chris dropped by the first night we got there and we talked fly fishing and where to try in the area.  We would meet up a few days later and fish closer to his hometown of Courtenay, but he let us know some great spots to fish and sight-see while we were in Campbell River. 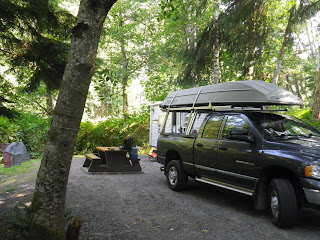 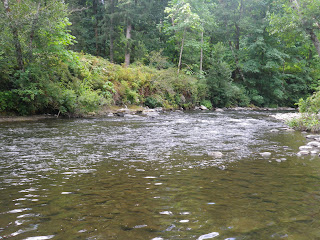 My anticipation was killing me the next morning, and I woke up early to hit the Quinsam and see what it was all about.  I pulled my waders and boots on, and tied on a dry fly on my 4wt with some 6lb tippet and slipped into the river behind our camp spot.  I worked my way up a few runs and landed a couple of small Coastal Cutthroats (my first Coastal/Sea-run cutts!), but all of a sudden took a look into the water at some commotion and realized that there was a good amount of pink salmon running through.  I quickly switched over to a rabbit strip streamer, and thought that my tippet would be good enough.  After all, these salmon didn't look THAT tough! Boy was I wrong...

After swinging flies for an hour and hooking Cutthroats instead, I finally hooked into a good pink salmon. I lifted the rod tip and the fish turned downstream faster than I could blink. With a quick "SNAP", my tippet and fly were gone, and I was forced to beef up the leader I was using quite significantly!  By this time I realized that it was probably close to lunch time, so I headed back to camp for some lunch, and to see if Tara wanted to go upstream for some trout.  We spent the afternoon catching Coastal Cutthroats on dry and wet flies, so we had a great time!
The next morning I woke up early to fish for pinks again.  I still hadn't landed one, and still wasn't hooking up on this day.  I tried a few flies, mostly in pink as I had heard that people had good success on pink coloured flies.  I had a few on, then finally landed my first pink salmon on a pink rabbit strip streamer.  They fight great, and it took me up and downstream before being subdued.  In the afternoon we checked out the Campbell River, but after seeing everyone fishing shoulder to shoulder, I decided not to wet a line in there.
The last full day in the area, I finally had enough of the pink coloured flies and thought that trying a new colour or style of fly might boost my success.  To that point I had hooked a few pinks, but had only landed one!  This theory changed my whole trip, and the fly was a success!  Within minutes of switching up, I hooked and landed 3 pinks.  A fourth was landed after a 200 yard trip downstream, and a jog down the middle of the slippery river by me!  I had to take a rest after this excitement, but couldn't wait too long as fish were still there to be caught!  The next cast swung down, and I was into my 5th pink of the morning!  Wooo, I finally figured these things out and found the right fly!  Uh oh...the fish ran down about 50 yards and snapped my 8 lb leader!  I was devastated and thought that it was the only fly I had like that, so back up to camp I went. 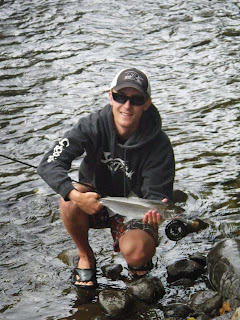 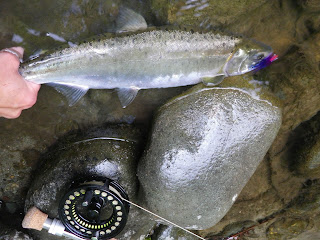 After searching through my box, I found one more fly exactly like it, but this one was black.  Hmmm...would this work as well as the purple streamer?  After tying on an even heavier leader, I was ready to hit the water again.  Two casts through the run, and I was into another pink!  Success!  They liked this fly just as much as the lost one.  I lost count of how many pinks I hooked and/or landed after that but that day now ranks up there as one of the most memorable on a fly rod I have had so far!
We did some sight seeing at beautiful Elk Falls later that afternoon, and toured around the city of Campbell River.  Also, had a great lunch right on the docks at the Ocean. 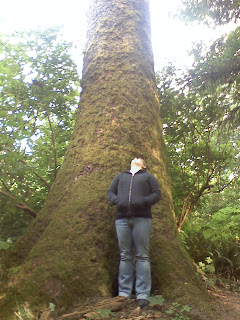 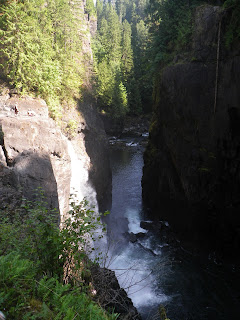 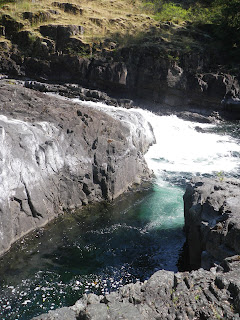 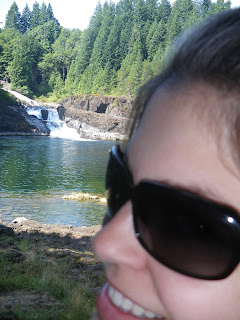 The next morning, I hit the river once again and had great success, but had to get back up to camp and hitch up the trailer.  We were on our way closer to the Courtenay/Comox area, and were staying at Miracle Beach Provincial Park located on one of the most beautiful beaches that I have ever seen.  I will post a part 2 to this report, starting at Miracle Beach soon!  I hope you enjoyed this first part.  Tight lines!
Posted by Tim Tchir on August 25, 2012 2 comments:


With high water and monsoon-like rains across Alberta and BC, trout fishing has been difficult this year. Wanting to still get-out and enjoy some sunny weather, we have managed to target a species that is still relatively unpursued in parts of BC: largemouth bass.

I know some folks associate bass fishing with an old Tennessee screen baseball cap, a jar of worms and a cooler of beer, but fly fishing for bass can be a totally unique excperience. Their behaviour is substantially different than trout in some ways, but eerily similar in others. During the heat of a 100 degree day, often times a bass won't drop down to deeper water like trout, but rather hunker down under a log in the shallows. They also don't generate nicknames like "Scarlett" or "Crimson Beauty", but rather generate nicknames like "big pig" or "old hoss". I love catching them nonetheless.

During the heat of summer I have had my best luck catching bass in mornings and evenings. A green wooly bugger on an intermediate sink line fished near vegetation has been my most productive means of catching them. This is very much like trout fishing as the bass will eat leeches, damselfly nymphs, dragonfly nymphs and minnows in these locations. I have also had luck casting huge foam dry flies and stripping them on the surface, this can produce some extreme excitement and explosive takes!


I headed out on a July morning a couple of weeks back to get some fishing in before it reached the hot part of the day. I was quite intrigued to have a damselfy nymph swim onto my float-tube and undergo complete metamorphosis into a fully grown adult with wings. The process took a couple of hours and was incredible to watch.


I could see bass shaking reeds and smashing damsels non-stop, much like out trout do during certain months of the year. I pitched a cast into the reeds, stripped back a green wooly bugger and BAM!!! "There we go!" I screamed. The fish hit like a freight train and bulldogged into cover HARD, bending my 6 weight like a wet noodle. Being alone, I brought in the solid 3 lb bass for this photo. 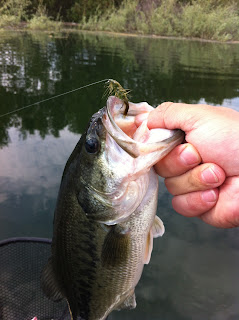 I normally wouldnt take holidays from work to pursue bass, but with hot beautiful weather and a nice lake to fish, who could ask for anything more?

Later on that day when the sun started to dip down, my uncle and I headed back down to the lake after a beer or 20 each. We saw non-stop rises from the pumpkinseeds (a type of sunfish). These can be great fun on small dry flies and nymphs. I cast my fly out into the water and the indicator dipped. What I had on wasnt fighting very hard, but it was a very familiar species with most anglers: a yellow perch, talk about a cool, totally different mixed-bag fishery. I started bringing the small perch in when all of a sudden the fish took a hard turn by a big upright stump and my rod was bent in half! HOLY SH*$ !!! This big largemouth bass had come out of nowhere and ATE the perch I was bringing in. Talk about bull trout-like behaviour!

I battled the fish hard and Uncle Paul screemed, "GRAB IT GRAB IT!!!" Having a couple drinks under my belt, I jumped into the lake, grabbed the big pig by the lip and jumped back onto the bank! Talk about a hog for this lake! It truly was Old Hoss and the biggest bass I have ver landed. I kept it and brought it back to camp, parading around the campfire with it like I had just won the BASSMASTER CLASSIC.

Overall bass fishing can be a great change of scenery from trout on the fly, as well as a unique challenge. I highly recommend going out and giving it a try!