We always seem to go far away from our hometown for fishing and other adventures, but sometimes the best fishing is right in our own backyard. A few weeks ago, Nick, Andy, and I headed down to the North Saskatchewan River in our hometown for some Goldeye fishing on the fly. Some of you might think I am making up the name of a fish, as a lot of people I have talked to around Edmonton don't even know what a Goldeye is. A Goldeye is a member of the shad family with huge (you guessed it) golden coloured eyes. that can grow in excess of 20"+ in size. They feed aggressively on anything from nymphs, dry flies, and even minnow fly patterns. On this evening, we used all of the aforementioned flies, and did quite well on all of them. Another fish called the Mooneye was caught, which is similar to the Goldeye, but is smaller in size, and has blueish silver eyes.

We made it down to one of our usual spots at first, but the Goldeye weren't really showing themselves. After a few frustrating casts with grass behind us, we headed upstream through some mud. Passing some old bicycles and shopping carts that had washed up on shore, we found the first of a few pods of rising Goldeye. Nick used a classic glass fly rod, and got some sweet bends on it with some hookups on the dry fly. Andy used mostly nymphs, and I used nymphs, dries, and streamers. 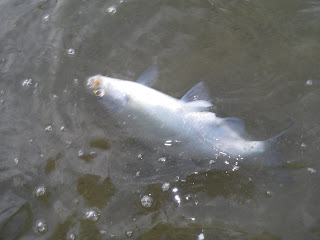 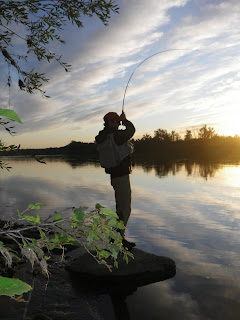 A local outdoor writer used to call Goldeye by the name of "Chrome Hubcaps", and that is what has stuck with us. We added that if you catch one over 20" it is a Chrome Rim. The scales are very bright and large, and the fish get quite fat. We didn't get any Rims on the night, but some were close in size! 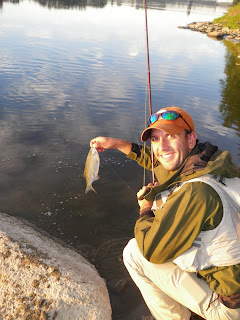 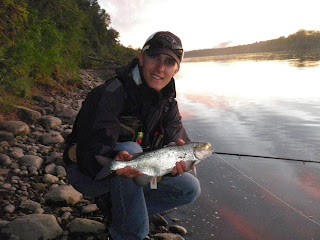 After we caught a few on dry flies and nymphs, it began to get dark. I switched to a Clouser Minnow pattern to see if I could get an aggressive strike. Within a few casts of stripping the fly in aggressively, a Chrome Hubcap of about 17" slammed the streamer right by my feet and ripped line out into the current. What a rush! We fished until dark, and had to climb a very steep sand hill to get up out of the spot we were fishing, but it was all worth it for a great night with good friends and some fun fishing right in our own backyards. That hill wasn't as easy to get up as it used to be though! 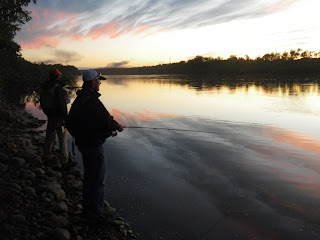