Ah, spring, and a little bit of a fishing trip

Well, last week threw us for a loop. We had a mild week, followed by some more cold and snow on the weekend, followed by a couple warm days, then a cold 'un today. Well, today was so-so I guess.

It was -2˚C when I left the apartment this morning at 11 o'clock, and it stayed between that and 0˚C for my 40 minutes drive out of the city. I My plan was to say, "to hell with studying this afternoon," and drive to 3 or 4 lakes nearby that may or may not be iced-off enough to wet a line from shore. Of course, I do this drive with a bit of fishing gear in the back of the truck.

Luck was good to me, and the first lake I stopped at had open water to the bank, and no other fishermen at it! That last part is important because there was only about 10m of bank available to cast from, and while I'm not opposed to sharing the wealth in this limited opportunity time-period, I won't complain about some solitude, either.

Eventually another fellow did show up, with a float tube (I wouldn't be so brave with the barely-thawed lake), and we chatted a bit. I guess the fishing was a bit slow the day before. It was today too, but I did manage two large trout, which sure helped cure my freezing fingers! (My rod guides were freezing all day) 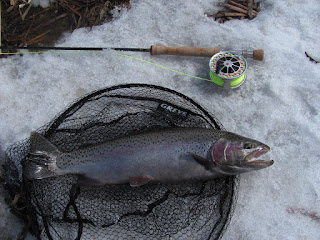 For this type of early, ice-off spring fishing, there are a few points to remember. Firstly, the water is cooooold! Like a degree or two above freezing. The trout are not overly active, so don't move your flies too quickly. Secondly, use year-round food items as your staple flies. My fish came on scuds and leeches today, with a few other patterns being ignored. Thirdly, be persistent. I fished for nearly an hour between each take (I had a third fish, but he sliced me off). The point? Don't expect miracles in the early season, simply be happy that getting out is an option, and remember that our best fishing is yet to come! 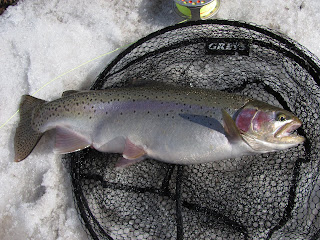 At this time of year, be nice. Open water is limited, and unless it is totally unreasonable to do so (like the time we already had 5 people fishing in 15m of open shore, and another guy showed up...), invite others to fish close by, and share a fly or tip.