Just over a week ago, the four of us from Western Sportfishing (Nick, Trev, Andy, and myself) embarked on a few days of cutthroat trout fishing and camping (which of course was accompanied by a few drinks).  You see, Nick will be the third one of us to fall to married life since 2009, and it makes for a damn fun weekend every 2 years!  I think we all agree that it should be a once per year thing at Kamp Kaleb!

Andy and I met in Calgary and headed on down to Southwestern Alberta.  Nick and Trev had travelled  down earlier in the day.  After stopping for some groceries and some booze, we were on our way down.  We didn't know if Nick and Trev were going to be on the creek when we arrived, or tired from the day and slamming back a few beers.  As we pulled up, it was the latter of the two scenarios, as a nice little pile of beer was ploughed back by the boys!  We hopped out of the truck and congratulated them on their progress and choice for the evening lol.  It would be the start of a great weekend!

The next morning, we woke up early to beat the weekend rush.  The water was cool and the air was too, but we trudged up the creek and hit into a few beautiful cutthroats on dry flies.  Andy followed us up with streamers to work the system.

We fished until about 2:30 in the afternoon and had a blast as the day warmed up and the fish became more aggressive.

After retiring to camp for a mid-afternoon lunch, some beers, and some BS'ing we decided to hit a lower part of the creek for some evening fishing.  Nick had a special license to keep rainbow trout on this particular water body so we were all hoping he would land one for a fish fry.  While it didn't happen, we had a good time anyways.  Fishing wasn't super hot, but we managed a few decent cutts!

As the sun began to set, we headed back to camp for a fire and some more drinking and BS'ing.  With everybody busy, we all don't get the chance to get together too often as a group so there were a lot of stories to be told.
The second day of fishing began with all of us fishing a smaller creek.  On this day, Trev and myself would run dry flies through each run, then either Nick would swing a double nymph rig through, or Andy would swing a streamer through for bull trout or aggressive cutts.  The system worked well and we were pretty successful.  The scenery was also great on this gem of a stream.


We fished til later in the afternoon/evening, then retired back to camp for some supper and festivities.  All in all, it was a great weekend with the boys and hopefully we can all get together to do it again soon!

Until next time "Kamp Kaleb" haha...still laughing at that name 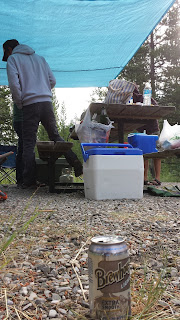 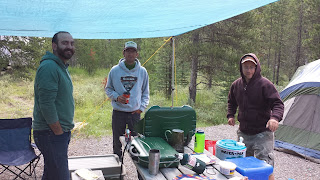