Thanksgiving. It's a time of year to be with family and friends, maybe enjoy a great meal or two and reflect on the things in life we appreciate the most. Normally we don't say grace and thankyou until our thanksgiving supper, which usually happens on a Sunday, but this year I said my thanks on the Saturday night. The North Saskatchewan River is basically the only flowing water in the Edmonton area which is worth fishing and sometimes it can be exceptional and produce truly amazing fish. 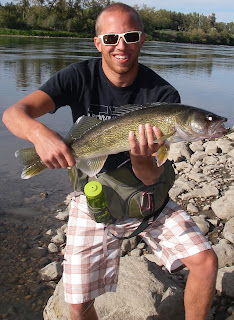 It is a relatively healthy ecosystem. Mayflies, caddisflies, and a host of other insect hatches occur. There are many species in the river as well. Walleye, Northern Pike, Goldeye, Sauger, and Sturgeon being the most popular target species. This year we had exceptional dry fly fishing in August and September for the goldeye and mooneye. Things slowed down a bit on the surface after the backswimmers and water boatmen blanketed the bottom of the river. That's when it became gear chucking time. 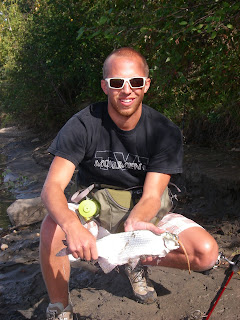 Friday of the Thanksgiving long weekend my dad and I headed to the river and had some great fishing. On just his second cast he claimed to have a nice walleye on. When it came up, I couldn't believe my eyes. He did have a big fish, but it wasn't a walleye. It was a close relative to the walleye known as the Sauger. These things look very neat. They have mottled sizes and are usually more dark brown in colour with no white tip on their fin. Sometimes they remind me of small rock fish from the ocean! Typically the sauger I'm used to catching are in the 1lb-1.5lb range. This thing was a beast! It was by far the biggest sauger I have ever seen. According to our measurements it was just under 5lb! A truly great catch and not too far off the Alberta record of 6lb 12oz. 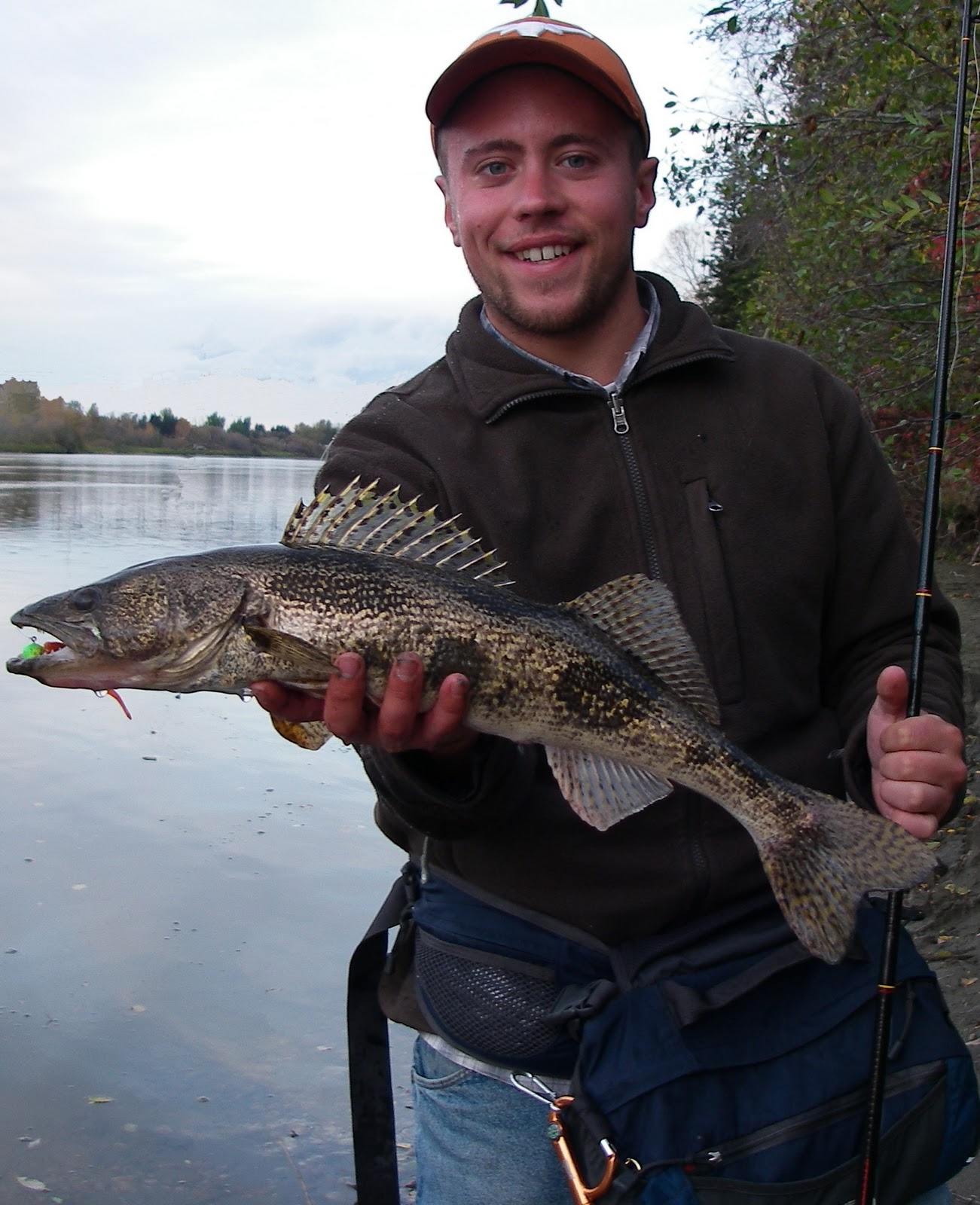 The next evening we went fishing after a hard days work and sighting in rifles on the farm. I slammed into a really good fish on my second cast. I landed a really good walleye about 5 years ago in the river and after landing a large walleye, you know how they feel versus a smaller one. The hit feels like a tap on your lure and when you set the hook, it's like setting into a thumping log. My rod was bent to the handle and at times it felt like I was bringing in a tree off of the bottom. You MUST have your drag set right when playing a big fish like this. If it's too tight, the barbless jig might simply pull out of its mouth or your line could even break. If it's too loose, the fish could shake the hook or it could simply just slip out of the fish's mouth.
After a couple a minutes of bulldogging on the bottom, we finally got a glimpse of it. I knew it would be big, but didn't anticipate it would be this big! I quickly subdued it when I could finally reach out and grab it and dad grabbed the camera. Finally after losing a fish or two like this over the last few years, I brought one in! It was my biggest walleye since 2006. The fish was a touch over 32" with an 18" girth. A solid 12lb + beast. I am not sure I got the girth measurement in the right spot because if you examine the picture closely, the fish appears to have either a sucker or a goldeye in it's stomach! What a fish! 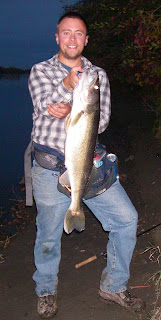 I gently released it and she went back down into her lair. I was shaking with excitement and celebrated with some cold ones in the garage and some George Jones with my dad. Now that is something to be thankful for and it was truly my best thanksgiving weekend to date!