A few days after New Years

Andy and I had plans for several days. It wasn't last minute, as it so often is in winter. No, I was busy, he was busy, hell, who isn't around Christmas and new years?

Anyway, we went to the Bow River, right in Calgary. The forecast: +7 but windy. Reality? Maybe +4 but calm. I'll take the trade off.

We always like going on these winter trips. We really don't expect much, so it really just means that winter fly fishing in Alberta is a 3-hour BS session, followed by a few hours of fishing and hopefully a few fish, and then the BS is resumed on the drive home. It really is a lot of fun, especially when we get into some trout.

This trip fit the bill. We left Edmonton early; at about 6 AM it was windy as hell here, but we had the faith. We got to Calgary, and the weather was cold, but calm and sunny, and it was promising. Anyway, we dawdled a bit getting our stuff in order, but we hot the water around 9:30 AM, with all the hopes and dreams of a complete geenie. 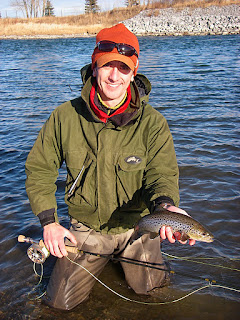 I think I broke the ice first, with a nice 16 or 17" brown; certainly not the largest we cold hope for on this river, but a good catch for January 4! A few minutes later, Andy got a nice rainbow of similar size, and on a nymph as well (I got mine on a #16 PTN, and Andy on a small Copper John). So far so good. 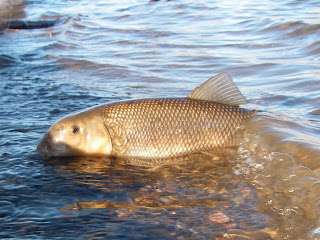 A while later, I got a nice white-dog of the same size, and we started laughing. Three fish, three species, and all the ones you could expect on the Bow. Sure, other fish are there, but you don't bank on them.

Sure as ever, next cast I got a 6 or 7lb pike of all things, still on the small nymphs! Yikes! I was lucky. I got it on the side of the mouth, so it didn't shred the tippet and leave me fly-less. 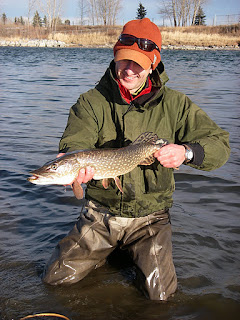 We had a nice lunch, laughing all the way to the bank about the fun we were having, even though we couldn't feel our feet, and the hands were cold as hell. After lunch, we put some T-8 sink tips I have on, and fished little spring creek buggers. Boom, I got a sweet brown on the third or fourth cast, then I cast out, but my hands were stinging. I let the line just sit there, and put my gloves back on. I picked up the rod, and lo and behold, I had a fish. Nothing less than a 4 or 5lb sucker. So that was four species for me, and five overall! 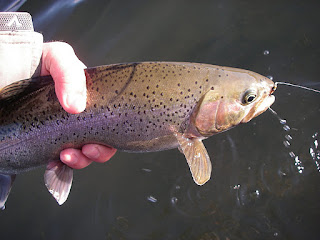 Let's get on with it. I got one more sucker of the same size (on a more aggressively fished fly this time) and finally my own nice rainbow! Andy got another 'bow or two, I don't really remember, and it really doesn't matter much anyway.

"Thank god I didn't get skunked!" Andy yelled. "I was worried you'd stop fishing with me!" (The last couple times we were out, he'd had a tough go, but he made up for it).

We made the usual plans for the coming year: lake bows in spring, brown trout, and some summer fishing for cutts and rainbows in mountain streams. It should be a good one.